What are the Stages of Growing Weed?

A self-explanatory term that alludes to the entire process of growing weed, from seed to ingestion and everything in between. This is where things get fun, but can also be a little, or a lot, overwhelming. If you are the type that loves to have a hard copy (book) to reference, the “Weed Grow Bible” is where it all started for me. Not that I follow everything written as a rule, but it gives you a great starting point and a place to run to if videos and online reading isn’t your thing. The entire book is concise and accurate with in-depth resources for all things weed!

Chances are you will be more addicted to growing weed

The last thing I want to do, is to over complicate things this early, but growing weed will become an addiction, so you might as well educate yourself right from the get-go! The more complex seed sites will actually have a calculator at the side of the page, where you can check off certain traits you are looking for; Size, Difficulty to Grow, THC Content, Yield, CBD Content, Strain etc. Here are a few links to some of the sites I have used without any issues. True North seed Bank, Crop King seeds, Toronto Weed seeds. Within the realm of seeds, there are also options as to what gender you prefer, as well as the length of growing time.

How to choose seed gender

Currently, there are four options when it comes to choosing seed gender. Regular seeds or “Regs” are a combination of male and female seeds mixed in a pack. Although they are from the same strain, they will produce two different gender plants, some male, some female or even possibly, all male and/or all female. It’s kind of a crapshoot to buy Regs if you don’t have any intentions of breeding or cross-breeding at a later time.

The males, like any male plant, will eventually produce pollen, which if harvested correctly or introduced to females correctly, will help to produce the next generation of seeds. It is through this process by which pollen from one strain of weed is introduced to a flower from another strain, and the seeds they produce will be a cross of the two. These “Hybrid” strains have proven to produce some of the most flavorful, aromatic and powerful Weed ever. I personally love both sides of the coin, sometimes it’s an original Landrace Strain and the next day could be a High THC Hybrid, all depends on how my day went.

Left: 30-day old Autoflower under accelerated blue lights, keep intermodal spacing (space between branches) nice and close. Right: If you see these on your plant, it’s a girl!!!

Next, you have Feminized seeds, a guaranteed female plant that will produce flowers (buds), the good stuff!!! These two examples, Regs and Feminized seeds will fall under the category of being Photoperiod seeds, and their shared characteristics in summary for females are as follows;

Can be kept in an indefinite period of vegetation by keeping the lights on between 18 hours and 24 hours a day. When female, these plants are held in this stage of Vegetation to prolong the plant’s ability to continually replenish itself through growth, therefore producing a constant supply of clones or cuttings. Basically, a baby weed plant factory.

My favourite autoflower seeds are “Ruderalis”

Finally, my favourite, the Autoflower seeds. These little buggers are the absolute perfect seed to learn how to grow weed with. Originally stemming from the Ruderalis Weed family, the convenience and ease at which these little ladies can be produced is phenomenal. Like other weed plants, you do have to take care of them and learn how to identify weed plant deficiencies, but because of their shorter growing period, the likely hood of dealing with deficiencies as compared to photoperiod plants is cut basically in half. Autoflowers also come in both male and female seeds, which means you can breed and cross breed Autos, just like Regs.

Unlike photoperiod plants, autoflowers don’t let you dictate when they go into flower by changing light periods. These little beauties base their flowering period on time. Usually with 2 – 4 weeks from germination, autoflowers just ironically enough, automatically go into flower. It is quite cool to see a plant that is only 18 inches in height, covered with big fat buds.

One thing photoperiods and autoflowers do have in common is that when they are approaching the end of their flower period, they basically start to die. The bottom leaves turn yellow as the plant draws all the nutrients directly into the buds; usually the buds themselves go through a colour change as well, especially if you control (drop) your nighttime temperatures. The trichomes mature and change from clear to milky (cloudy) to amber, and the buds, now coated with THC, look plump and smell absolutely amazing. For a better view of your trichomes and how they are developing, this magnifying glass is really all you need.

In the early stages of flowering. Notice the Trichomes starting to develop on the bud and the leaves. 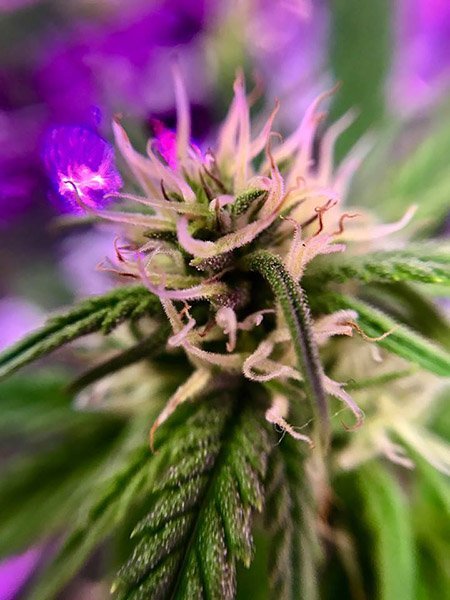 Here is a video that breaks down all the information above as far as Regs, Feminized and Autoflower seeds.

As flowers mature they will generally change colour and in most cases, the scent will change as well.

As we get more in-depth in the coming weeks, I will get into specific breeders and seed propagators that can provide you with “custom” hybrids that you generally wouldn’t see on a typical weed seed site.

Again, a clear term that alludes to the entire process of growing weed from clone (also known as a cutting), to ingestion and everything in between. A clone can be defined as Definition: A clone is an exact replica of a host marijuana plant; it looks (and smokes) precisely like the marijuana plant that was used to create it, keeping in mind that it is grown in similar environmental conditions.

A clone can be created from a branch that is clipped from the host (mother plant – female) and is then dipped in cloning gel or aloe gel (organic) which then stimulates it to grow roots correctly, once planted in a host medium. This process can be done repeatedly from several sites on the mother plant. Cloning may look somewhat daunting but really it is quite simple. Here a few videos to help you through the step by step process using Clonex and as an organic alternative, aloe gel. Let it be known that you cannot clone an Autoflower because of the time constraints in its growing period.

Freshly cut clones dipped in root enhancer and then placed into Peat cups.

My preference for starting a weed grow cycle

There are benefits to both ways of starting your own weed plants (seed or clone) depending on your personal preference, situation and potential growing environment. My preference is to start from seed, simply because it helps to avoid cross-contamination of weed plant deficiencies, plant diseases, mould and critters that can come with using clones grown by someone else. Again, having total control of your plants and the environment they grow in, is paramount and I cannot stress this enough!!! Watch this video to learn all about the afore-mentioned diseases, mould and bugs, along with tips on how to cure and treat them.

Beyond the plants, there are decisions to be made in regard to Growing medium; soil, living soil, coco, hydroponics etc. Climate control; temperature, airflow, filtration, humidity etc. lights; LED, HPS, CFL etc. These all have a huge part in growing weed.
With so many options available, what I want to do, is to describe my setup and what works for me, followed by other options and what I know about them. I will also be writing another article in the next week specifically about the best growing mediums and what has worked for me and my friends in the past.

In my setup, I’ve had to, like most people, make a lot of things happen in fairly small space. My room in total is approximately 30 square feet. Although small, I can produce nine Autoflower plants at any given time using certain techniques to get maximum light penetration to all the budding sites. You have to get the most out of what you have, so in this case, growing Autoflowers is the best option for me.

I personally prefer LED, full spectrum, dimmable lights. First, because LED lights produce about 60% less heat than an HPS (High-Pressure Sodium) does, being in a small space, it heats up fast, so the less heat produced means the less heat I have to vent. Second, the average LED light, only uses about 35% of the hydro (electricity) that a HPS light does.

Third, and to me, the most important, is being able to control the intensity of the different light spectrums. On the lights I personally use, there are dials that let you dim the red, blue and white LED lights independently. This again gives you total control. For a beginner this might seem complicated but again, it’s like anything, it’s only as complicated as you make it. Here is a link to the LED light I use and also a video of them in use.

In my grow room I have chosen to grow in an organic living soil/coco coir mix, in 5-gallon fabric air pots. Living soil is a combination of many pre-mixed organic amendments that when combined create a healthy and again, living growing medium. The coco coir is a growing medium made from the husks of coconuts. On its own, Coco would be unable to sustain plant growth as it holds very few nutrients.

As a buffer mixed with living soil it is perfect because it provides great drainage and aeration to the roots, which promotes healthier growth and in turn, healthier flowers. Another reason I have chosen this particular growing medium is for taste. No I am not eating the soil, but rather the weed that grows in this medium tends to have an accelerated taste, a more pungent scent and a cleaner “High”. So not only is it healthier to grow organically, it also produces healthier, better tasting buds!!!

Here is my recipe for living soil, based on filling a 5-gallon air pot.

Finally, we need to chat about your HVAC (Climate, temperature and humidity control). As important as all the other parts of your growing environment, the way you feed your plants clean, humidity, temperature controlled air, is vital. Again, this may seem complicated but it is honestly quite simple nowadays. In the photo above you will see a standalone Air Conditioning unit with a built-in humidifier. I bought this used on Kijiji for $50, and it works great, it has a built in thermostat and humidity controls. It gives me peace of mind knowing my plants are in a stable environment.

The air you will be exhausting will be free of most, if not all weed smell. Depending on the size of your room and the number of plants you are growing, all of these HVAC fittings also come in 6-12 inch sizes. In fact, if I was to do it all over again, I would have, at the very least used 6-inch equipment. In my environment, I never have to worry about it being too cold, therefore no mention of heating. This may not be the case in your situation, so going forward, I will also get into heating one’s room if need be.

The page you requested could not be found. Try refining your search, or use the navigation above to locate the post.